Good grief. Things were going fine this year. We went to Chicago in January to see Hamilton one more time before it closed, and went to the Garfield Park Conservatory. It was so fun. We visited some bookstores, too.

Then the rest of January was fine. On February 14, I started working in the lunchroom at Pigeon River School. I mostly worked with kindergartners. They were adorable. A few weeks later, everyone started losing their insanity over Coronavirus which was traveling all over the globe. We started having to wear masks at school. Then March 16 was our last day of school. We all had to stay home and only go out for necessities. This eventually led to us wearing masks at the store or when we are around people. I haven’t done so much cooking as I have done since March. For a while the restaurants were closed except for drive-thru and curbside pickup. Then they though it was getting better, so the Republicans in Madison and the WI Supreme court thought things should open up again. So, they did that in May. Now the numbers keep going up and up and up. Crazy. We are all still healthy and Sarah hasn’t been home since the weekend before March 23rd. We went into lockdown on March 24th. That’s the day she went home. So, this is our new normal.

Then they told us about murder hornets, which like to kill bees and are 2 inches long. I don’t think they are in WI, thank goodness. It’s just been one thing after another.

We don’t get together with friends. We watch church at home and get communion delivered to our homes periodically. Occasionally we have book discussion with videochat software. Edie and I did an escape froom thing one day with our phones on a video chat, while we both sat at our computers. That was fun. We can also watch Hamilton now, on Disney Plus with the originial Broadway cast. So, there has been entertainment. But not movies, sadly. In the Heights will have to wait until next year.

http://budgetbytes.com has been a great site to get meal ideas from. There are so many different recipes. http://iowagirleats.com also has yummy recipes. We sometimes use http://twopeasandtheirpod.com too.

This site uses Akismet to reduce spam. Learn how your comment data is processed.

I like to go on about the weather and my knitting, with a smattering of pictures of  my dog! 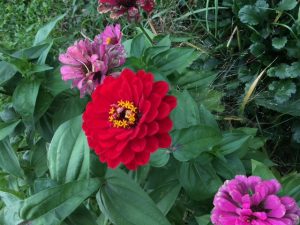 “Summer afternoon—summer afternoon; to me those have always been the two most beautiful words in the English language.” —Henry James

My name is Dawn and I live in Wisconsin!  I love seeing all the blooming flowers!